Join us for a kickoff event in Jackson

Join us for a kickoff event in Jackson

Jackson, WY – Do members of Congress truly represent the views of their constituents today? Or are they more likely to listen to the wishes of the large corporations and wealthy donors who provide most of the funding for their re-election campaigns?

A recently-formed citizens group called Wyoming Promise fears that corporate and special interests have captured Congress and other legislative bodies through large campaign contributions, and wants to do something about it. It is hoping to get a citizens’ initiative placed on the November 2018 ballot so that Wyoming citizens can stand up and call for an amendment to the United States Constitution declaring that corporations are not people and money is not speech.

“This is the defining issue of our time,” says Ken Chestek, a University of Wyoming law professor and chairman of the group. “I think of this as Issue Zero. There are many things we need to fix in our politics, but you can’t fix any of them until you fix the problem of money in politics first.”

Chestek and Wyoming Promise Treasurer Shelby Shadwell will be in Jackson at 7:00 p.m. Thursday, May 18, at the Old Wilson Schoolhouse Community Center, 5655 Main St., Wilson, WY to present Citizen Uprising: How Big Corporate Money is Stealing Our Democracy (And What We Can Do About It). The program will describe how the problem has become more acute since the 2010 Supreme Court decision in Citizens United v. Federal Election Commission, and will conclude by describing efforts in Wyoming and around the country to resolve the issue through a Constitutional amendment.

To date, 18 states have enacted measures calling on Congress to propose an amendment overturning Citizens United. Both Colorado and Montana passed ballot measures in 2012 by wide margins (nearly 75% in favor), calling for that amendment. Citizens groups in least five states, including Wyoming, are now organizing initiative drives to push that number even higher. And several states, including Nevada, are close to making a similar call through legislative resolutions.

Chestek and Shadwell will provide an update as to the efforts statewide in Wyoming to get this measure on  the ballot in November 2018. The program is free and open to the public. 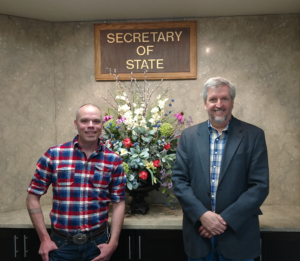