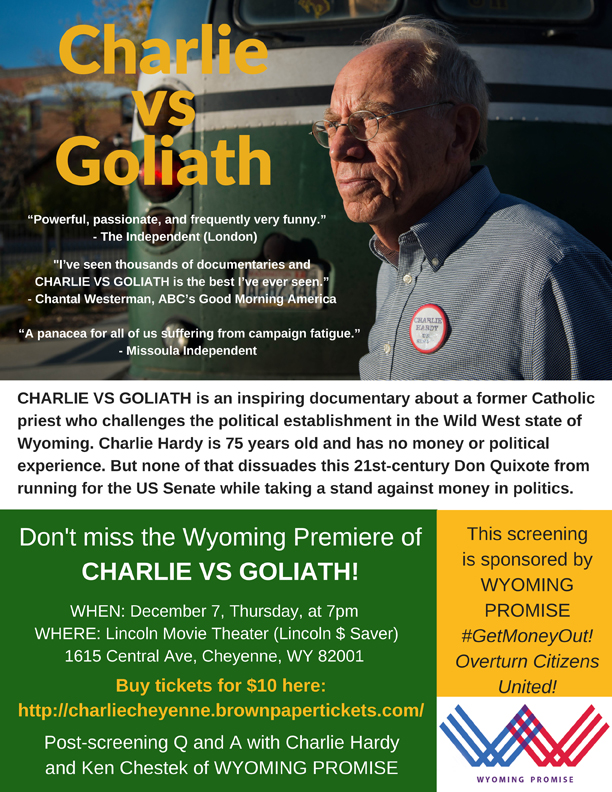 Tickets available HERE and at the door.

November 29, 8 AM KGAB 650 AM with Glenn Woods will feature Reed Lindsay, Film maker, Ken Chestek, of Wyoming Promise and Charlie Hardy star of the film Charlie vs Goliath.

Are you ready to be inspired? Do you feel we need to get money out of politics? Dont miss the Wyoming premiere of the inspiring new documentary film CHARLIE VS GOLIATH (www.charlievsgoliath.com), which is going to be screening at the Lincoln Movie Theater in downtown Cheyenne on Thursday, Dec. 7 at 7pm. The screening will be followed by a discussion and Q and A with Cheyenne native and former US Senate Candidate Charlie Hardy, who will be joined by Ken Chestek, the Chair of WYOMING PROMISE, the organization leading the charge against money in politics in the state of Wyoming.

Known as the Bernie Sanders of Wyoming, Charlie served as a Catholic priest and spent 8 years living in a cardboard shack in Venezuela before returning to his home state to run for the US Senate while taking a stand against money in politics. Powerful and passionate, CHARLIE VS GOLIATH has screened in film festivals across the United States, from Hollywood’s Chinese Theater to the Buffalo International Film Festival. Here’s what people are saying about it:

“A panacea for all of us suffering from campaign fatigue.”
– Missoula Independent

Ken Chestek is a lawyer, a former candidate for the Wyoming legislature and currently an Associate Professor of Law at the University of Wyoming College of Law. WYOMING PROMISE’s mission is to pass a 28th amendment to the U.S. Constitution that would overturn Citizens United vs. FEC through a statewide ballot initiative. The organization believes that campaign finance reform is the only way we the people – not corporations, not special interests, not unions – can bring back democracy and govern ourselves.