We announced at the end of November that we’d gathered 20,255 petition signatures. These signatures from currently registered Wyoming voters are part of a citizens’ initiative to formally call for a 28th amendment to the U.S. Constitution promoting free and fair elections.

Although the signatures demonstrate widespread voter support, the number of signatures did not meet the State’s threshold of 38,818 valid signatures necessary to place the initiative on the 2020 ballot. In the coming months, we will work with state legislators to introduce several bills in support of the 28th Constitutional Amendment.

The following is taken from the official press release.

“This petition drive represents an incredible effort from over 300 volunteers who did a great job gathering signatures,” says Ken Chestek, Chair of Wyoming Promise. “Because of their commitment, we were able to mount a grass roots campaign that represented every county in Wyoming, including five counties who exceeded the threshold of over 15% of registered voters.”

Of the more than 20,000 verified signatures gathered, nearly 60% were from voters registered as Republicans, 30% were from registered Democrats, and the remaining 10% were from people registered as unaffiliated or other parties. “We are happy to see such cross-partisan support for this nonpartisan issue,” adds Lynn Horton Morrison, Vice Chair of Wyoming Promise. “The fact that over 20,000 Wyoming voters are calling for us to address this issue is a huge deal.” 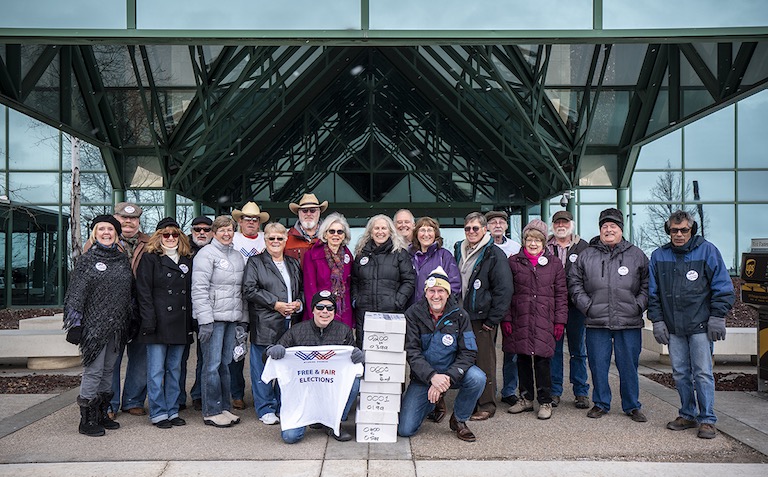 “These signatures are just the first step in a larger campaign to make Wyoming the 20th state to call for a 28th amendment to promote fair and free elections,” says Shelby Shadwell, secretary/treasurer. “We are excited about working with our state legislators and are confident that they will act.”

In a letter to Wyoming citizens, retired Wyoming Senator Alan Simpson called on Wyoming citizens to “stand firmly on the right side of this fight for the future of our democracy,” and he urged them to “support a 28th Amendment to the Constitution so we can have reasonable limits on election spending, reform pay-to-play politics, and secure human liberty and equal representation rather than turn our government over to a global corporate marketplace.”

So far 19 states, including Montana and Colorado (both with 75-25% in favor), and over 800 cities and towns, have passed 28th Amendment resolutions with broad cross-partisan support.